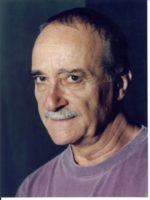 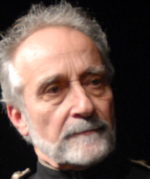 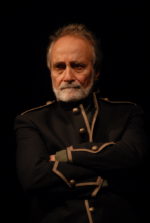 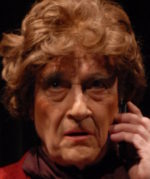 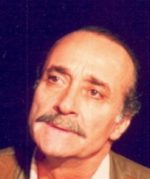 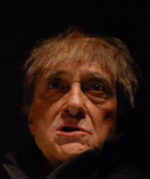 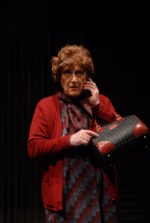 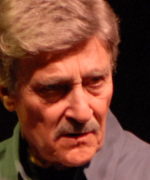 He was born in Athens in 1938. Graduate of Christos Vachliotis Drama School. Makes his debut in Costis Livadeas’ Company, Oedipus Rex, 1962, in role of Creon.

Luigi Pirandello ‘’All for the best’’, Gualdi

Arthur Miller ‘’All my sons’’, George

Loran Hansberry ‘’A raisin in the sun’’, Bobo

In 1969 he founds ‘’Steps’’ Company along with Leda Protopsalti and makes his directorial debut in Kambanellis’ ‘’The courtyard of miracles’’ followed in 1970 by Jean Anouilh ‘’Antigone’’  and Marios Chakas ‘’The culpability’’.

Directing all productions,  as well as appearing in them:

Directing work for other companies

He directed the same play in a new production for Badminton nTheatre in 2015.

Since 1981, he has contributed to various major newspapers and magazines, writing commentaries and editorials(TA NEA, I LEXI, RIZOSPASTIS, TA NEA TIS KYRIAKIS, KATHIMERINI).

His book ‘’Praising crimes’’ has been published by Kastaniotis Publishers, as has his play ‘’Bye, now’’ by Kedros Publishers, ‘’40 years Stoa Theatre’’ by Theatre Stoa Editions.

He has served for many years as Vice-President of The Greek Center of The International Theatre Institute(I.T.I.) and President of the Theatre division of Greek Directors Institute.

He directed the feature film ‘’On Utmost Treason’’ for which he wrote the script and starred as well – 1967.

In 2017 he starred in Elina’s Psikou film ‘’Sophia’s son’’ and was awarded best supporting Male Actor by Greek Film Academy.

He has participated in various productions, playing small parts.

He has directed children’s plays for Greek Television since 1976.

Five production from Theatre STOA have been transferred for television.

He has directed for GREEK TELEVISION-2 the series ‘’Madame Sousou’’, in which appeared as Panagiotakis.

He has starred in the series ‘’The lottery ticket’’, ‘’Young and old’’ (where also conducted discussions with the audience) and ‘’13th  Case’’(directed by Tassos Psaras)

For his contribution in the theatre he has been honored:

2006 GREEK THEATRE MUSEUM and INSTITUTE OF THEATRE STUDIES with the ‘’Fotos Politis’’ award for his life contribution to the theatre.

For his overall contribution to theatre and the arts he has received many awards from several Greek cities.